Who's Most Likely to Get Bullied at School? 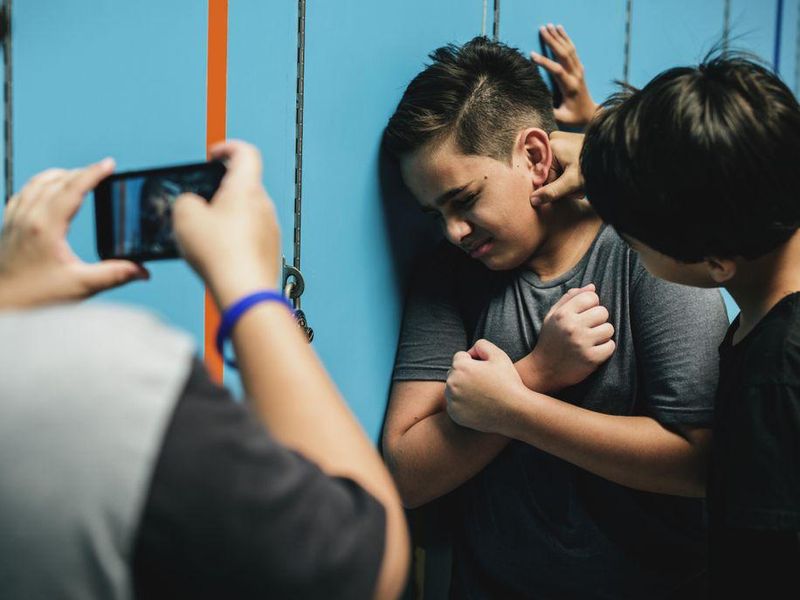 TUESDAY, July 27, 2021 (HealthDay News) -- Bullying remains a threat to American teens, and a new study reveals which kids may be at highest risk.

Race-based bullying takes a heavy toll on teens, the research found, but minority kids who are picked on for other reasons â whether gender, sexual orientation, religion, disability or immigration status â suffer a double whammy.

Victims' physical and mental health suffer as their exposure to violence rises, according to a survey of high school students in Pennsylvania. They're also more likely to become violent themselves.

"Oftentimes, there is a focus on really trying to capture or assess the consequences of identity-based bullying based on a single aspect of someone's identity, and we know that people are multifaceted, right? There are multiple social identities," said researcher ChardÃ©e GalÃ¡n, who studied the issue while at the University of Pittsburgh. She's now an assistant professor of education at the University of Southern California in Los Angeles.

To evaluate the impact of bullying, her team surveyed nearly 4,000 ninth- through 12th-graders at 13 public high schools in Pittsburgh.

Almost 10% of the students reported experiencing race-based bullying, and nearly 6% had bullied someone because of their race, the study found. Young people who were part of several stigmatized groups had even higher rates of bullying.

More than one-third of respondents identified as Black; about 53% were assigned female at birth; 32% belonged to a sexual minority; and 10% were gender diverse, meaning they identified other than male or female alone.

Many of the victims did not seek medical attention, the study authors noted.

The survey linked bullying with self-harm, suicidal thoughts and greater involvement in violence. That included threatening or injuring someone else with a weapon or surviving such an attack, as well as fighting, sexual assault, intimate-partner abuse or experiencing the slaying of a friend or family member.

GalÃ¡n said those working with students often use a colorblind approach to dealing with problems, but there's a pitfall: It tends to ignore that specific students might have unique experiences that need to be acknowledged and addressed.

She said it is important to continue to push for antiracist practices in schools and understanding youth within larger oppressive systems. The next step is attempting to dismantle the forces driving the inequities, GalÃ¡n said.

Gender-diverse Black and Hispanic youth reported the highest rates of being bullied and of bullying, the survey found.

"This emphasizes the fact that these experiences of discrimination, including discrimination based on one's gender or sexual orientation, should really be incorporated and considered as parts of programs that address race-based discrimination," GalÃ¡n said.

That's important when thinking about the "school-to-prison pipeline" or the likelihood that some youth might be funneled into the criminal justice system or to respond to discrimination with potentially problematic behaviors, GalÃ¡n said.

The study was published online July 23 in JAMA Network Open.

Sandra Graham, a professor of education at the University of California, Los Angeles, wrote an editorial that accompanied the findings.

Graham said the rise in hate crimes associated with COVID-19 make this a critical time for taking the study of identity-based bullying in new directions.

It's important that students who are being bullied know that they shouldn't blame themselves, she noted.

"We need to be working very, very hard to change the social norms in schools," Graham said. "It is not OK to pick on other kids."

Graham said schools need to have more racial and ethnic diversity so groups are relatively equal in size. Instruction and activities should be organized so there is less emphasis on who has authority to shape the norms and who doesn't.

"You just have to make sure that the activities that are available in your school are available to everybody so that there's more sharing and more equality," she said.

Graham added that this could be by race, but also by all of the other dimensions of different kids in school.

"Schools have to be really sensitive to that," she said. "The main thing is that kids have to be learning tolerance for people who are different from them because the main determinant is the imbalance of power."

Stopbullying.gov has more information and resources for the issue of bullying.