AHA News: The Heart Health Risks of Being a Single Parent 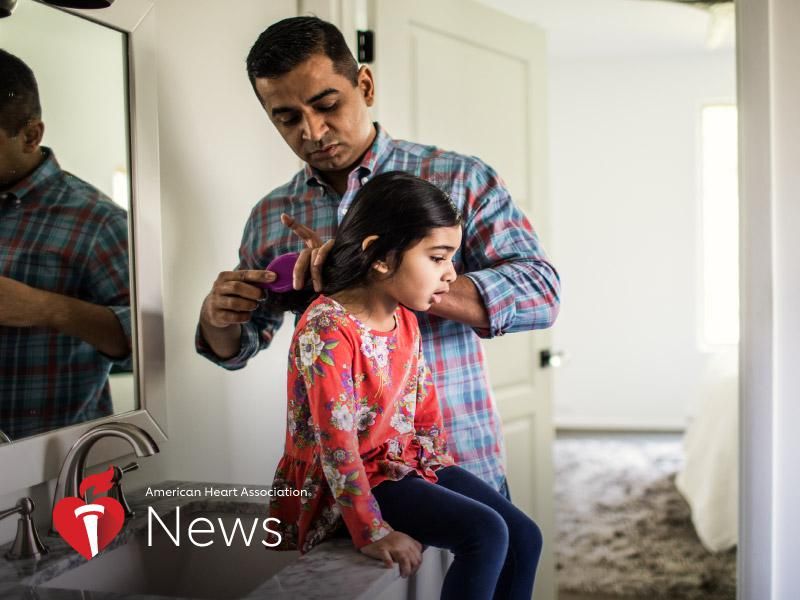 WEDNESDAY, Dec. 2, 2020 (American Heart Association News) -- Nobody needs a study to tell them being a single parent is tough.

"This is a group of people who are kind of carrying the weight of the world on their shoulders, right?" said Dr. Natalie Stokes, a cardiology fellow at the University of Pittsburgh Medical Center. "You're taking care of kids. You're trying to provide for your family."

Hoping to shed new light on the toll single parenthood takes on heart health, Stokes and her colleagues recently analyzed a federal health survey of 2,180 parents, which included 462 single parents, a quarter of whom were single men.

Researchers looked at seven heart health indicators â such as blood pressure, obesity, diet and whether the person smoked â and rated the parents on a 14-point scale. The single-parent group scored about half a point lower than the partnered parents. And single mothers scored almost a full point lower than mothers with partners.

The research, which is considered preliminary until published in a peer-reviewed journal, was presented last month at the American Heart Association's virtual Scientific Sessions conference.

Even after adjusting for age, race, existing medical conditions, poverty and more, the single-parent group was 1.31 times more likely to be rated as having below-ideal cardiovascular health.

While her study didn't pry into the reasons behind the discrepancy, Stokes hopes to explore that in future work.

An international study in 2016 found that being a lone working mother predicted a higher risk of heart disease and stroke among women in the United States. In the early 2000s, researchers who tracked Swedish women for up to 20 years found that single mothers had greater odds of dying during the study period than women who had partners. And a Canadian study in 2016 found single fathers were three times more likely to die during the study's decade-long follow-up than single mothers or partnered fathers.

But Stokes emphasized her work should not be viewed as pointing to a problem caused by single parents. She'd rather focus on using it to make society more responsive to their needs.

"It takes a village to raise a kid, right? Well, your village is already really small if you're a single parent," Lundberg said. She was not involved in the new research but offered firsthand knowledge of life in a single-parent household.

"I think the study supports what we suspected all along: It's very stressful to be a single parent. Single parents have less time for their own health because there's no one to offload the sharing of responsibilities to. So, they tend to do more for their kids and neglect themselves.

"That's certainly what I witnessed," she said. "My father died when I was 14." Her mother raised her and her sister.

Before her father died, Lundberg remembers her mother making regular medical appointments. After his death, "I can't remember her going to the doctor at all. And I think there just wasn't time."

Lundberg, who also is an associate professor of medicine at Emory University School of Medicine, had several ideas for how health care providers could be more accommodating.

"I think we've got to have some options to make things more flexible for these parents," she said.

Family care providers, for example, might offer appointments where parents and children could get their checkups at the same time. "Maybe on Saturday morning, when the kids aren't in school." And OB-GYNs could offer appointments for women to have bloodwork, blood pressure, breast and general physical exams done during a single visit.

Stokes said although her study's findings were just a starting point for understanding what single parents need, physicians could use the information as a prompt to consider their patients' life situation in deciding their care.

Doctors need to be allies with their patients in overcoming barriers to care, she said.

"The onus shouldn't be on the individuals," Stokes said. But patients can help by being open about their struggles, and by speaking up when necessary. "Maybe more aggressively early on saying â¦ 'I was made aware that this might put me at increased risk. What types of things should I be doing?'"

They come from all kinds of income levels, education levels and ethnic backgrounds. It's mothers as well as fathers. And whether they started out as single parents or became one because of the death of a spouse, they deserve support, she said.

"I think we need to be doing more to realize they're stressed, it's affecting their health, and they need our help."